What is the Ultimate Gift of Iman? 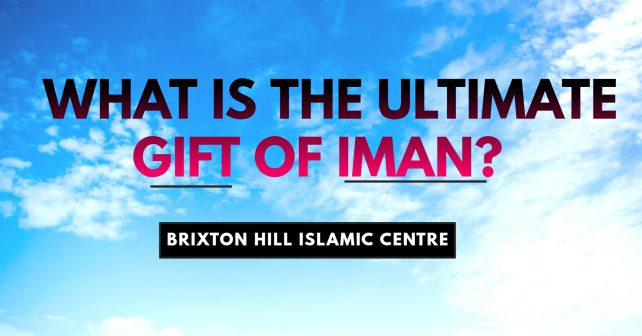 What is the Ultimate Gift of Iman?

Iman (إِيمَان ʾīmān, lit. faith or belief) in Islamic theology denotes a believer’s faith in the metaphysical aspects of Islam.[1][2] Its most simple definition is the belief in the six articles of faith, known as arkān al-īmān.

The term iman has been delineated in both the Quran and hadith.[3] According to the Quran, iman must be accompanied by righteous deeds and the two together are necessary for entry into Paradise.[4] In the hadith, iman in addition to Islam and ihsan form the three dimensions of the Islamic religion.

There exists a debate both within and outside Islam on the link between faith and reason in religion, and the relative importance of either. Several scholars contend that faith and reason spring from the same source and hence must be harmonious.[5][who?]

In Arabic, iman (إِيمَان ʾīmān), pronounced [ˈʔiː.maːn] means “faith“. It is the verbal noun of آمَنَ “to believe (in something).”

In a hadith, Muhammad (PBUH) defined iman as “a knowledge in the heart, a voicing with the tongue, and an activity with the limbs.”[citation needed] Faith is confidence in a truth which is real. When people have confidence, they submit themselves to that truth. It is not sufficient just to know the truth, but the recognition of the heart should be expressed by the tongue which is the manifestation of the intelligence and at last to reflect this confidence in their activities.[6]

Hamiduddin Farahi, while explaining the meaning of imān in his exegesis, wrote:

The root of imān is amn. It is used in various shades of meaning.[7] One of its derivatives is mu’min, which is among the noble names of Allah because He gives peace to those who seek His refuge. This word is also an ancient religious term. Hence the certitude which exists with humility, trust and all the conditions and corollaries of adherence to a view is called imān and he who professes faith in Allah, in His signs and in His directives and submits himself to Him and is pleased with all His decisions is a

The Six Articles of Faith

Of these, the first five are mentioned together in the Quran[10] and by Muhammad, (PBUH)  while including a corollary of belief in Allah – the good and evil of fate ordained by God – has referred to all six together in the following manner in the Hadith of Gabriel:

“Iman is that you believe in God and His Angels and His Books and His Messengers and the Hereafter and the good and evil fate [ordained by your God].”[11]

Another similar narration ascribed to Muhammad (PBUH)  is: